Tracking Down the Causes of Bunch Stem Necrosis 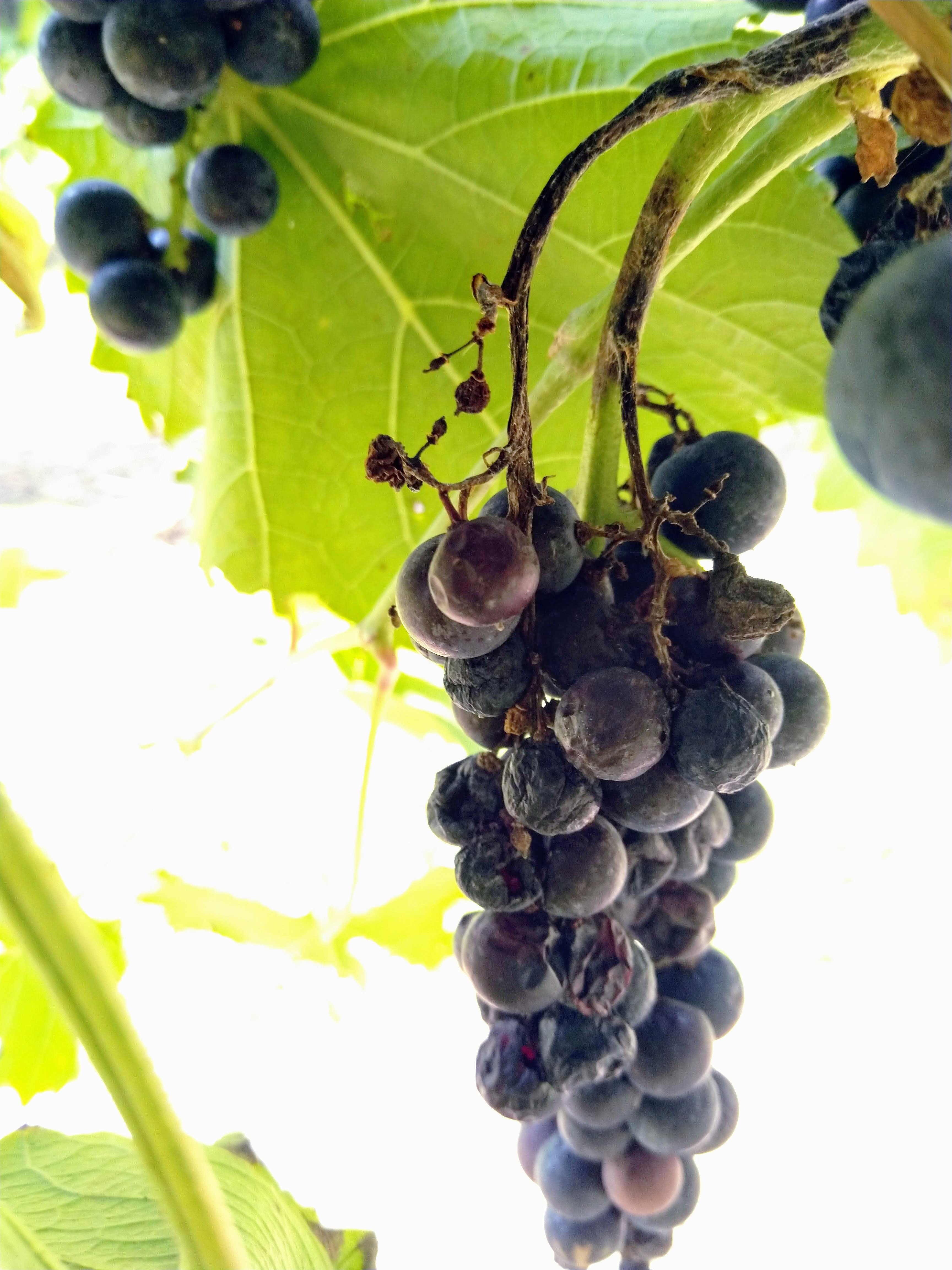 Late bunch stem necrosis (LBSN) is a complex physiological disorder of grapevines, where the bunch stems (rachises) shrivel during ripening, followed closely by berry shrivel. This sudden change is frustrating for growers, when seemingly healthy vines produce unusable clusters. LBSN affects vineyards worldwide, but may be caused by a number of environmental stresses. This means that developing treatment recommendations is a complex, long-term task that may vary by vineyard.

The University of Minnesota viticulture team is working to understand why LBSN is happening on Minnesota vineyards so that we can provide appropriate treatment recommendations.

1) LBSN is not a disease, so fungicides are not effective against it. LBSN should not be confused with diseases that cause mummies, such as black rot and bunch rot.

2) LBSN is a physiological problem that happens in response to some stress in the environment. Stress causes the plant’s xylem (the “veins” of the plant that transports water and nutrients) to shut down in the cluster during ripening. With a dead xylem, water cannot be transported to the rest of the cluster. So the bunch stems dry, and then the berries dry up.

I wrote an article about LBSN in February in the UMN Grape Breeding and Enology Blog. Between then and now, at least 22 vineyards in Minnesota have reported LBSN symptoms to me, as well as growers in Wisconsin, Ohio, California, Virginia, Vermont, and Nova Scotia. These reports included crop losses between 5-90%. This widespread response highlights the problematic nature of the disorder and the need to determine causes and treatments for it.

Searching for the Causes of Bunch Stem Necrosis

The causes of LBSN are not well understood globally. Previous research has associated several different environmental stresses with LBSN, so we are working to determine what is causing the problem in Minnesota. Potential stresses include cool, wet weather after veraison; excessive pruning; unhealthy vines; and soil nutrient imbalances. 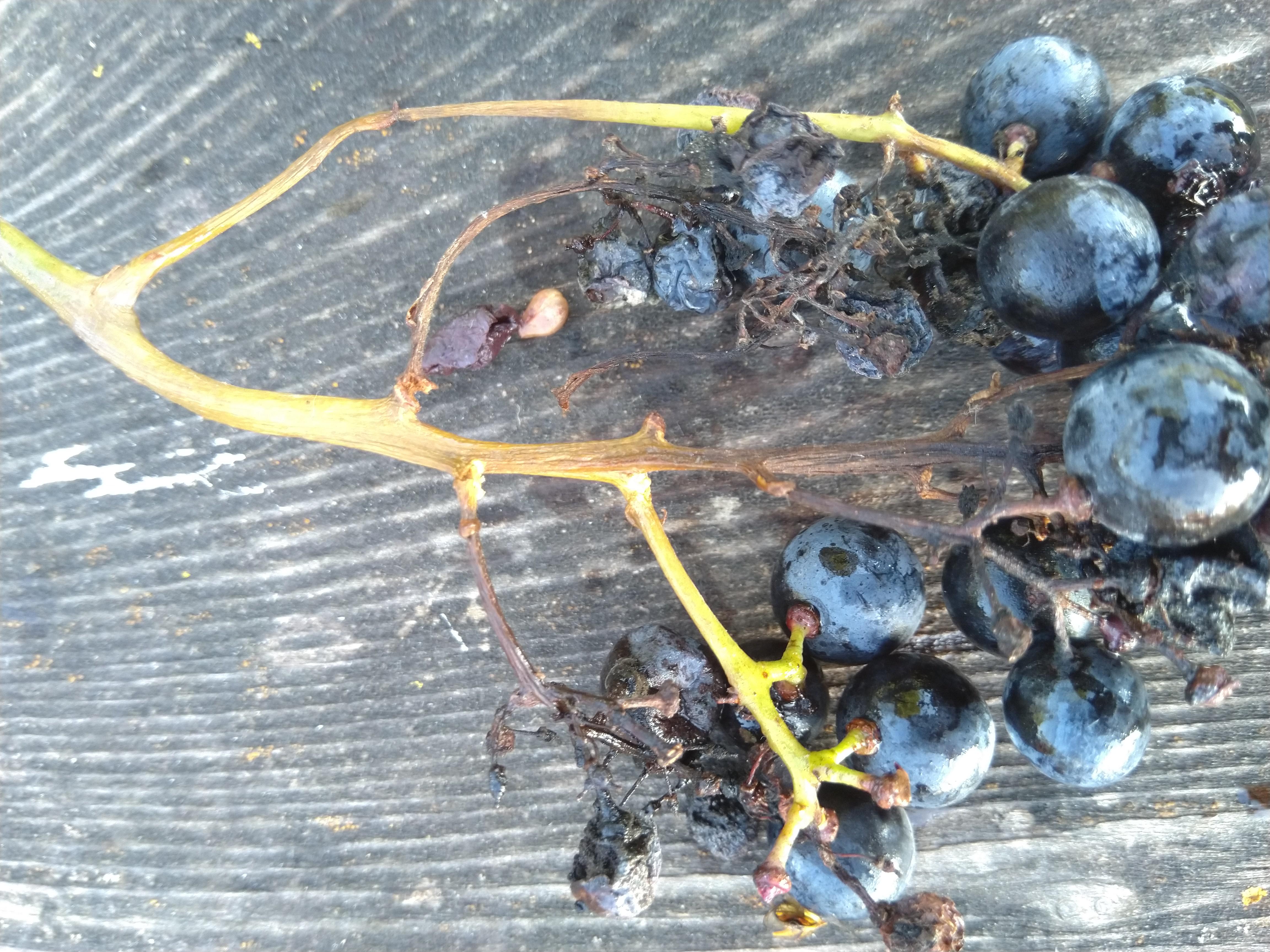 It is more likely that LBSN in Minnesota is associated with wet, cool conditions and the overall health of the grapevines, rather than soil nutrient availability. This hypothesis is based on preliminary research this season, previous studies in other regions, and state-wide weather data from 2016-2018.

Cool, Wet Fall: Cooler-than-average temperatures and heavy rainfall during ripening have been associated with LBSN in previous studies in Europe and Australia. Weather data from 2016-17 in Minnesota do show relatively wet, cool weather during August and September in many parts of the state, when LBSN was reported to be most severe. LBSN in our area may be worse during seasons when weather is cool and wet following veraison. However, further research is necessary to examine this more thoroughly.

Faster ripening may potentially reduce the impact of LBSN, by allowing the fruit to mature before symptoms set in. In at least one vineyard I visited this season, fruit that was mature and ready for harvest prior to Sept. 18 was essentially able to “outpace” the peak development of LBSN. When temperatures are cooler than average during veraison and ripening, clusters tend to ripen less quickly. Practices to help accelerate ripening, such as shoot thinning, cluster thinning, and increasing sunlight exposure to the fruiting zone, can all be used to help accelerate ripening.  Future research should explore how these canopy management practices may help minimize LBSN.

Nutrients: A handful of studies in other regions linked LBSN to nutrient deficiencies like Mg, Ca, and N. However, this does not appear to be the case in Minnesota. My preliminary research from this season yielded no evidence of nutrient deficiencies in any of the vineyards I studied that reported LBSN. In fact, we found that all four vineyards had plenty of these soil nutrients. Fertilizer applications are not recommended unless soil tests reveal deficiencies. Unneeded fertilization can cause run-off and excessive vine canopy.

While visiting vineyards exhibiting LBSN symptoms in mid-September, I began noticing that almost all affected vines also had aerial roots. Aerial roots (roots forming on the cordons) can happen in response to winter injury, late frost damage, or excessively wet, humid conditions. While they do not negatively affect the plant, they do serve as a useful clue that the vine is experiencing these conditions.