Phomopsis is a prevalent grape disease in Minnesota, and should be sprayed for as part of your early season spray program between bud break and pre-bloom stages. If uncontrolled, it causes brown and black lesions on the canes, black/yellow spots on the leaves, and rot on the ripe berries that can lead to weaker plants and yield loss. Below are some key tips for managing phomopsis: 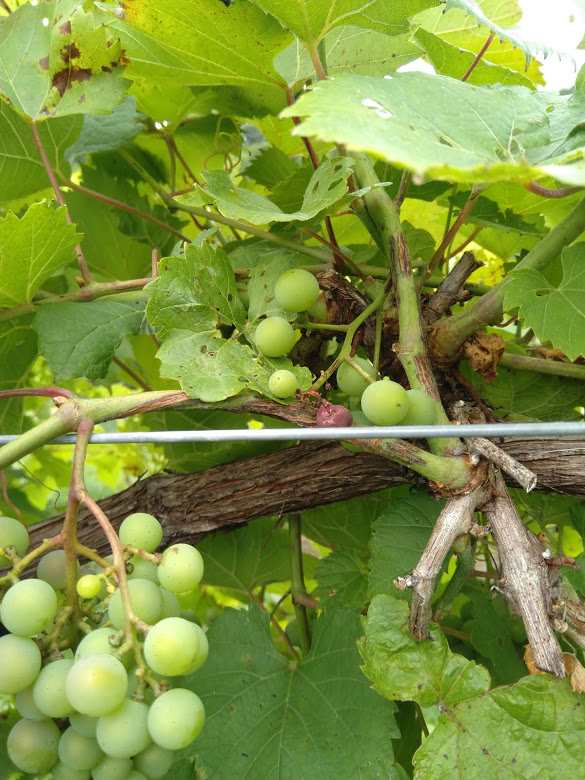 1) Your timing is important: Spray for phomopsis between bud break and bloom after wet weather, typically 1-3 times. Phomopsis disease spores overwinter on last year's canes and woody tissue. In the spring once conditions are right, the spores are released and spread to new shoots and leaves via rain drops. Infection requires at least 6 hours of leaf wetness, and ideal temperatures are between 60-68 degrees. Since these weather conditions are common in the spring, it is usually necessary to spray at least once.

2) Once a shoot is infected, symptoms do not appear immediately. Symptoms of the infection become visible on the leaves a few days after the infection, and on the canes 3-4 weeks after infection. The fungus will lay dormant on the berries until veraison, so symptoms will not be visible until after veraison. In other words, symptoms you see during harvest probably happened during bloom and needed to be treated weeks earlier. By the time the fruit is beginning to rot, it is too late to treat effectively.

3) The following products have effectiveness on phomopsis: Captan (very effective), Mancozeb (very effective), Ziram (moderate), and Pristine (moderate). Apply one or more of those products at bud break, before the shoots are 4 inches, especially if the conditions are right for the fungi to spread (see #1). Do another application when the shoots are between 4-10 inches, and again pre-bloom if needed (weather-depending). Mancozeb, Ziram, and Pristine also control black rot.

*Pristine's REI becomes 5 days if you are doing shoot positioning.

4) As much as possible, determine the timing of your sprays based on when weather conditions are right for phomopsis infection. If your work schedule is flexible, do not rely on a "calendar spray" for diseases or insects in general. It is much more effective to spray based on plant growth stage, weather, scouting, and knowing how much infection you have had in past years. If weather has been dry and warm since your last spray, the phomopsis spores are not likely active. If weather has been cool and wet, spraying becomes more necessary because spores have likely spread.

5) Prune out canes that have black lesions on them (See photo above, and in Ohio Sate page below) and remove or destroy them.